Tina experiences what it’s like for people living with Dementia 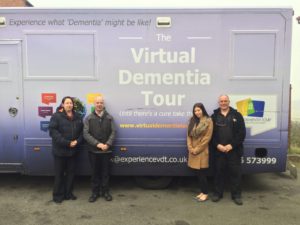 Tina Clough took part in the Virtual Dementia Tour. She is pictured second from right.

Tina recently underwent a personal crusade to find out more about a disease which affects 850,000 sufferers in the UK alone.  Putting herself in the shoes of a Dementia sufferer, here she unveils why we all have a responsibility towards education about the life-changing illness.

Like many of us, the word Dementia means very little to me.  My personal experiences of this disease, which is expected to affect one in five of us at some point in our lives, have been extremely limited.  That is until recently…

Last year I fell in love, I met my life partner, we had a whirlwind romance and needless to say we are getting married in May this year.  It was then that my first experience with this horrific disease began.  His mum is a sufferer (we usually say ‘Living with Dementia’ instead of sufferer), and has had Alzheimer’s for many years.  I admire his family, partly because they have thrown themselves into making adjustments to ensure that she is happy, healthy and cared for, often making sacrifices in their own lives to do so.   I came into my partner’s life like a bolt from the blue, ignorant about what this disease means on a day-to-day basis, how it affects families, causes guilt, upset and, in many cases, isolation for the sufferer (individual).

I don’t mind admitting that as a new person coming into the family, I had no idea of how to handle this.  My parents are healthy, I haven’t met anyone with Alzheimer’s or Dementia, let alone have the knowledge of how to help someone with the disease.  As terrible as it sounds, I had no idea how to behave around someone with the disease, especially when a conversation cannot be held between you- something which many of us take for granted.

Then a few weeks ago I received a call from our client Milford Care Group, which would change all of this.  They invited me to attend a training session being held by Training 2 CARE, for carers from its six homes – Spencer Grove Care Home, Hazlegrove Care Home, Ashbourne Lodge, The Meadows Care Home, Ernehale Lodge and Milford House. As it transpired, this would give me a greater understanding and compassion for the disease.

On a cold wet Friday morning, I arrived at Spencer Grove Care Home in Belper, along with a cohort of carers all seeking to improve both the quality of care for those living with Dementia, and their own personal level of understanding.  Among the bouts of nervous laughter, we all sat in a room waiting to be called up in groups of three. I assumed that this would be akin to a session I took part in at school to simulate what it is like to be visually impaired, and was immediately transported back to my 15-year-old self being blindfolded, using a cane and reading Braille.  How wrong could one person be…

We boarded a van which boasted the title ‘The Virtual Dementia Tour’ in bold writing across the side and was met by a man who can only be described as sharp! After failing to introduce himself, barking orders at us and handing us some interesting garments to put on, I felt like I had enlisted in the army, never mind an educational experience! I was told to put a large glove on my right hand, a smaller glove on my left hand, and some headphones over my ears. I was then handed some tunnel vision glasses to reduce my sight, and some insoles for my shoes, which were pure agony because I had failed to wear any socks (It could only happen to me!).

We were lead one at a time into a darkened room and the trainer shouted orders at us, many of which I couldn’t even hear because I had white noise pouring in from the headphones.  I can honestly say that I felt disorientated, and very alone.

I am an independent woman, I run my own business, I always have it together, yet in this moment I wanted to hold on to someone, anyone and not let go. A huge sense of sadness began to creep over me.  Is this what my partner’s mum feels like? I recognised some of my reactions in her.

Above the white noise which filled my ears, I was then given further orders by the trainer to ‘do something useful’.  I could just about make out the shadow of Sam, the HR manager at Milford Care, and she grabbed my hand.  I couldn’t have been more grateful to her at that moment in time.  I began to feel frustrated.  I couldn’t do anything useful, I couldn’t see a thing, I was unsteady on my feet, and I just wanted to sit on the floor with my head between my legs.  One of the carers began screaming and crying uncontrollably.  She eventually asked to leave, and I became determined to complete the experience despite feeling dizzy and helpless.

Flashing lights filled my eyes, and I felt sure that the van was moving underneath my feet.  I am still unsure whether this was actually the case, or just the fact that I was extremely disorientated.  Every so often loud sirens or the slamming of doors could be heard over the white noise from the headphones, and it made me scream out loud more than once. Afterwards we observed the next group quietly, and there I began to understand some of the traits I had seen in others living with dementia.

In our de-briefing we were asked by the trainer (Tony, who happened to be lovely!) what we originally thought of him, to which one lady said he was an a**e! He explained that when someone without Dementia is introduced to a sufferer of the disease, we naturally put barriers in the way.  We fail to introduce ourselves, we bark orders, thinking that this is the best was to behave, and we come across as – Yep you’ve guessed it- an a**e!

The only UK license holder of the Virtual Dementia Tour, we were told that the system was originally developed by a lady called PK Beville who has dedicated her life to improving the lives of those affected by Dementia. Over a period of four years she developed the noises we heard in the headphones and sent them to people living with dementia to determine if the noises we heard during the course of training were correct.  In the end, 73 out of 75 suffers questioned confirmed that this is what they hear- and what’s worse, they even hear this at night.

We were told that those living with dementia are drawn to the colour red because, as part of the natural aging process, we develop an orange film over our eyes from the age of 40.  This means that we can see the colour red more easily than many others in the spectrum.  My eyes were opened to the fact that if you place foods on red plates, or offer red fluids, those with dementia will often eat more.  Not because they prefer blackcurrant juice all of a sudden, but because they can actually see it! I suddenly became aware that when we go for dinner we give my partner’s mum a few menu options and she always chooses the last option we give her. Not because that is her preference but because this is how her short term memory is working – she can only recall the last option she is given.

Overall, this experience has changed my perception of the disease.  I hope that this will enable me to have more compassion.  I hope that this will work to develop my relationship with family members as they progress in this disease, and I thank the team at The Milford Care Group for giving me this once in a lifetime opportunity.

More carers at homes throughout the county should be enrolled on such schemes and by doing this, the care they give will no doubt make a huge difference to the lives of their residents.

We will all be touched by Dementia or Alzheimer’s at some point in our lives if these latest figures are anything to go by.  For me personally, it is frightening that no cure has been found.  I had to endure ten minutes of this experience and admittedly I could not cope.  For an estimated 850,000 currently suffering from Dementia in the UK today, they cannot simply say they wish the experience to stop, or that they wish to get out of that darkened room.  These people for me show incredible bravery.  As a society we should be making more of these virtual experiences to aid understanding.  Who knows, in the future the shoe could be on the other foot.