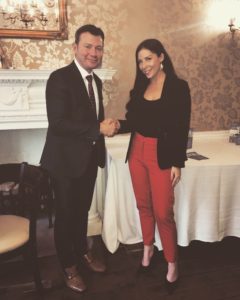 Donington Manor, based in castle Donington, is the latest signing for Ilkeston-based Poppy PR, which is headed up by Tina Clough.

The Poppy PR team will be providing the hotel with traditional PR services, as well as helping to coordinate its social media presence and forging community relations.

Tina, who last year won an English Women’s Award, said: “We are delighted to have secured a contract with Donington Manor. It has taken several months for it to come to fruition but the hotel was impressed with the plans we have to boost its profile.

“We will be working on showcasing its Sunday lunches and afternoon teas, boosting relations with nearby Donington Park and are looking into local sponsorship opportunities.

“We are also planning to invite food bloggers and reviewers to sample what the hotel has to offer and will be looking at ways to encourage more people to stay during big events, such as Download.”

The deal comes after Tina, who lives in Castle Donington, visited the High Street hotel for a community event to celebrate the refurbishment of its largest function room.
During the event, she met Managing Director, James Blick, who invited her to a meeting to discuss the PR opportunities.

James said: “After considering many PR and marketing agencies, it was clear that Poppy PR had the passion and enthusiasm to boost the hotel’s profile. They clearly stood out from the other tenders we received and we very much look forward to working with them”.

Donington Manor Hotel is just one of a number of new clients secured by Poppy PR in recent months, including Eastwood-based IT support firm Your IT Department.
The expansion of clients coincides with Poppy PR celebrating its ninth year in business.

Tina founded the firm in April, 2010, after working as Property Editor of the Nottingham Post, followed by a stint at a Nottingham-based digital marketing agency and other high-profile agencies in the city.

Since then, Poppy PR has flourished and last year, Tina was awarded the Young Achiever of the Year accolade at the English Women’s Awards.

Tina said: “It has been a fantastic start to the ninth year in business for Poppy PR. The business is going from strength-to-strength and I am looking forward to continuing the growth in the future.”

For more information about Poppy PR contact 07851 015325 or email poppyprteam@gmail.com.