Two weeks ago, Poppy PR met an inspirational woman from Eastwood who battled years of domestic violence, to deliver courses aimed at giving local ladies the practical skills they need to live a confident life.

Our client, Dr Ruth Tully, an expert in cases relating to domestic violence, has praised local woman, Sarah Griffin (36). Sarah experienced years of domestic abuse over the course of two relationships and was even hospitalised after a violent attack. She is now helping other people learn skills and gain confidence to they too can move forward with their lives.

After leaving her most recent partner back in 2011, Sarah had big dreams of joining the police force to help other women suffering in silence, but a back injury meant that she needed to find an alternative avenue for her passion.

Sarah, who is a fully trained mechanic, said: “I was 19 when I found myself within a domestic violence relationship and at its worst, I was hospitalised. I found myself back in this familiar position a few years later, but this time I was a victim of emotional abuse.

“My partner would tell me what to wear and would even put my outfits out on the bed for me first thing every morning. I stopped seeing my family and friends, but thought at the time that ‘this was just his way’. It wasn’t until I confided in my friend that I had a ‘light-bulb’ moment that this wasn’t right.

“She put me in touch with the Broxtowe Women’s Project and from here my life really started to change.”

Funded by the Police and Crime Commission, the Broxtowe Women’s Project has just successfully carried out a six-month domestic abuse project in Eastwood and is in the process of rolling out a brand new project in Stapleford, Nottingham.

Chris Harris (57), Training and Awareness Officer for The Broxtowe Women’s Project, said: “I met Sarah some time ago now when she was taking part in our Freedom project. The Freedom Projects teach the victims of domestic abuse about their perpetrators and the tactics they use. These sessions are very emotional and for many ladies, it can be the first time they realise the full extent of what has happened to them. The only way that many of these ladies are able to survive is to shut down about what is going on around them.”

The latest pot of funding will allow the Broxtwe Women’s Project to start a new initiative, which will see business owners in Stapleford house a mannequin adorned with white ribbons on their shop windows, stitched with the helpline for ladies who feel that they need some support. Supporting materials will also be distributed to various workplaces throughout the event to coincide with the International Day for the Elimination of Violence against Women 2018.

Chris, who has managed front-line domestic abuse workers for many years, continued: “The initiative all began when we met with the Sewing Belle shop in Stapleford and found that the owner, Elaine, was involved with a local business group within the area.

“The group heard about our fantastic work in Eastwood and wanted to help us with our latest initiative in their own town. We have a launch event taking place on November 24th at the Sewing Belle, where there will be free taster craft sessions and activities for the children too. We hope that we will raise enough money to fund Sarah’s latest venture- practical workshops for women in the area.”

Sarah, who has grown in confidence since leaving her partner in 2011, added: “From speaking to the ladies at The Broxtowe Women’s Project, we found that they were keen to learn the life-skills needed to live an independent life after leaving their perpetrators, and so I began running classes on topics such as preparing your car for winter, rewiring a plug and even on dealing with the emotions brought about by Christmas and its strain on finances.”

The project is currently seeking a new base to run its classes in Stapleford and is appealing for help from the local business community to support them. 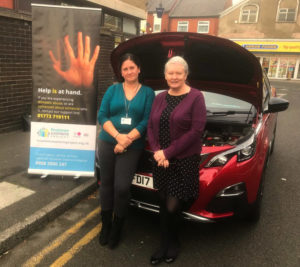